Bicycle sales are up 73% this year. Why? Because telling people they have to stay inside does not bode well. Instead, they dust off their old bike or buy a new bike and hit the trails. But how do you get to that trail? What if you’re a person who lives in the city and relies on your bike for more than fun? Bicyclists, regardless of necessity or recreation, deserve to feel, and be, safe on roads, trails, and wherever they may ride.

First, and I cannot stress this enough, SLOW DOWN. Our city streets are not highways. Please drive the speed limit (or less)! These are places where people live and children play, no different from the suburbs.

Did you know a car traveling 23 mph has a 10% chance of killing a person upon impact? At 32 mph, the chance of pedestrian death rises to 25%. At 40 mph the chance of a pedestrian being killed is 75%. SEVENTY-FIVE percent. Every day I watch people fly down the side street I live on and race down the commercial street I work on, seconds later arriving at a stop sign or a light.

Last year, I petitioned the Traffic Commission to lower the citywide speed limit to 20 mph. The “20 is Plenty” movement exists to make our streets safer by lessening the chances of vehicular death. Unfortunately, due to prohibitive state law, the city would be required to do an engineering study of every single street to implement a blanket lowering of the speed limit. It’s a feat so large that no third-class city in Pennsylvania would be able to undertake it due to the exorbitant cost.

My solution? Drive 20 mph within Lancaster city limits. I do it. Why can’t you? Half of the time you’re going slower anyway due to the never-ending city construction. Speeding between lights does not actually get you to your destination quicker.  When you drive slower, you are more likely to notice and yield (which is the law, by the way) to pedestrians. You might encounter something you have never noticed before by driving just a little slower- a beautiful blooming flower, a friend walking down the street, or that pothole that just cost you $100 in realignment…

Next time you get to one of our two-lane one-way streets like Chestnut, don’t speed up because there are wide lanes and long stretches with no lights. Instead, stop for pedestrians who are in the crosswalk and slow down because anything could be coming your way, including those giant potholes that seemingly appear out of nowhere.

Pennsylvania state law requires that you must pass a cyclist with at least 4 feet in between your vehicle and the cyclist. You can cross the yellow line to do this. Cyclists are also completely in the right to “take” an entire lane. In the city, it’s often done to protect us from parked cars. In the cycling world, we refer to it as “getting doored” – when a driver opens their car door into the lane and a passing biker collides with the inside of said door. It can be deadly (and easily solved with a move called the “Dutch Reach”. Use your hand opposite of the door to open it. It forces you to turn and look in the mirror before you open the door).

I’ll be out and about riding in the center of the lane which is my legal right and so I don’t get “doored” and someone will pass me so closely I can feel their mirrors graze me. Then, I see them give a double-parked car the berth of Texas when passing. You tell me, what’s wrong with that picture?

Ultimately, I’m glad it happens to me. Because I will continue to ride even though I am fearful every day. Not everyone is like me though. As you’ll be hard-pressed to keep me from biking. But I have to ask, since when have we become so concentrated on speeding to our destination that we put human life in danger?

The 4-foot rule isn’t only for city driving. If you come upon a cyclist biking in the middle of a rural road lane, give them a berth. Around Lancaster County, they may have simply been trying to avoid some “road apples”. Many cyclists will adjust their position in a lane to help signify to a car that it is safe or unsafe to pass. Middle of the lane? Please do not try to pass. When the cyclist moves to the right, pass away. Also, the cyclist simply might not hear the car. Give that human being the benefit of the doubt. Ultimately, we all want to end up in the same place: alive and at home.

Give a huge thanks to people who ride bikes. Why? Because it takes over 17 thousand trips by bike to equal the impact that an average-sized car has on the road in one year. If more people rode bikes, maybe we could have nice roads, too! We can’t control when UGI rips up a recently paved road but we can lessen the impact we have upon it by choosing human-powered transportation over single-family cars and trucks.

According to the Active Transportation Plan for Lancaster County, 64% of people are prevented from biking because the streets don’t feel safe. On top of that, 54% of people think drivers are too aggressive. 70% of people think that motorists do not respect the rules of the road.

The other day I spoke with two charming women who expressed wanting to ride into the city from their suburban homes. What’s stopping them? Fear. They see how drivers treat cyclists and how they tear down the road and they don’t feel safe. Wouldn’t you want your mom, or friend, or your run-of-the-mill human to be safe? I know I would.

The fact that I have to even mention this next point infuriates me. GET OFF OF YOUR PHONE. Not too long ago I was riding behind a driver that kept tapping on their brakes at odd moments and swerving all over the place. I came up to them at a stop sign and looked over. They were texting. They were driving a 2000 pound machine while their face was buried in their phone. Your texts can wait. Human life is more important.

Let’s talk about paint on the road and bike lanes. Did you know that green paint means there is an area of conflict and that drivers and cyclists should be extra cautious when coming to the intersection? And what about a sharrow, you know, the chevron with the bike rider icon? That means you must share the road with the cyclist. It means you must be patient and wait until you have…wait for it…4 ft or more to pass! And please do not park in and/or obstruct the bike lane. It forces cyclists into traffic which is incredibly dangerous.

The City of Lancaster recently joined the Vision Zero movement to eliminate traffic-related deaths and serious injuries by 2030. This approach to design believes traffic deaths are preventable, not inevitable, and that saving lives is NOT expensive.

And yes, I’m well aware that not all cyclists obey the rules of the road. I’ve been known to yell at people going the wrong way on a one-way street because I do believe that we all have the ability and responsibility to do better. Many people, both riders and motorists, are not aware of the laws that are in place to make our streets safer for everyone. I encourage you, be you a motorist or a cyclist, to drop by one of the awesome bike shops in the area and ask about the law. Or, even stop by to take a bike on a test ride through city streets and feel what it is like to ride amongst traffic. You’ll engage with people who are passionate and kind and openly accept you into our world because we truly believe that bikes build bonds. I guarantee you will become a better, more aware driver and have a newfound respect for what we go through on a daily basis because we ride bikes. 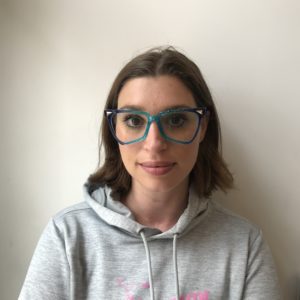 Adriana Atencio is the Director of Development of The Common Wheel & the Chairperson of the Lancaster Bikes! Coalition