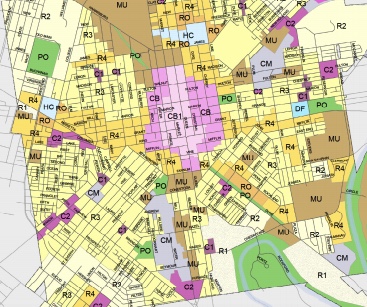 Riding the City Block by Block

Last week, Franklin & Marshall College Professor Doug Anthony came into our Queen Street Shop and mentioned he was riding the entirety of the city…block by block! We thought it was a pretty cool undertaking and asked him to share a bit about the venture:

“During the stay-at-home order, riding went from being transportation to my main form of exercise.  I live in Chestnut Hill, in the northwest part of the city, and most days I was riding through downtown and the southeast, through Churchtowne, to County Park.  Then I’d pop out on Broad or King and circle home past McCaskey and F&M. I get bored easily, so any time I saw an opportunity to take a new street, I would. I was riding most days, so I had a decent feel for NW, SE, and NE Lancaster pretty quick.

I was also getting a little stronger, so the hills in the southwest part of the city started looking good. That’s the part of the city I know the least, and once I started running out of new pavement there, it was a short step to thinking about hitting every block of each street and named alley inside the city limits. Traffic was light during the stay-at-home, so I figured if I was going to do it, I should do it now. That was early May, when I started being systematic. I’d ride the hills in County Park, then head for that day’s target and work the grid for an hour. Riding the grids was fun for me. I had missed a few blocks tucked in beside Thaddeus Stevens, and some alleys and side streets around the Sixth Ward Park. Riding like that slowed me down, and it took longer to hit my mile targets, but it was more fun for me than churning in a straight line.

In May it was time to check a map, so I downloaded the city zoning map and looked for what I missed. There were a handful of subdivisions I had assumed were outside the city limits, out Pitney Road and Lampeter Road, that were pretty straightforward once I knew to ride them.  But a couple of spots I would never have found without the map, one of them a few streets tucked in between the southern tip of the city and County Park, and part of a little enclave near the Catholic Cemetery in the southwest. Once I hit those, I had to go back to the map to check my work, and I found a couple of spots I had missed, but I knocked those out the week we went from red to yellow. I’ve lived here for almost 25 years but only now do I feel like I have a decent handle on the lay of the land. I’m glad I did it.

Want to undertake this adventure? Click here to see the zoning map!